Trending
You are at:Home»Demographic Data»What % of American Homes have Internet Access and How do They Access It?

Access to a stable internet connection has almost become a necessity to American Life. I was curious to see what percentage of Americans have access to the internet in their homes. I was able to find that in 2014, the American Community Survey estimated that approximately 79.87% of households have internet access. This can vary though by state. The visualization below shows the percentage of people that have internet access in each state, and how they access the internet.

The data for this visualization comes from the United States Census Bureau. It is gathered during the American Community Survey. I used 2014 1 Year Estimates for each of the states. This can be found at American Fact Finder under Table B28002.

I utilized Excel and Tableau to create this visualization.

How do Households Access the Internet In Each State? 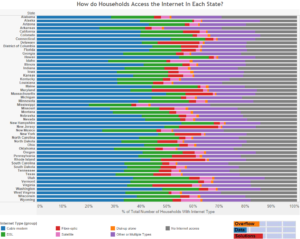