Trending
You are at:Home»Demographic Data»Is the Percentage of People With A Bachelor’s Degree Increasing?

It is true that the percentage of the population has a bachelor’s degree is rising, but this doesn’t appear to be the only change that is causing the proportion of the population with a bachelor’s degree to rise based on my analysis of this graphic. Both the percentages of “25 to 34 year olds” and “35 to 44 year olds” have increased by 3.6% and 4.2% since 2005. There is an age group with a much bigger jump though over the last ten years.

The “65 and older”  category has the largest growth over the last ten years at 6.4 percent. I don’t believe that this growth is from a large number of people in this population going back to school. It likely is due to more people with a bachelor’s degree entering the age range while the oldest individuals pass away. This likely is affecting the proportion of the population as well as modest growth in the number of people going to college.

The data for this visualization comes from the American Community Survey which is conducted by the US Census Bureau. One year estimates from 2005-2014 were used to complete the time series. They can be found at American Fact Finder on Table S1501.

Is your county/state more educated then others? 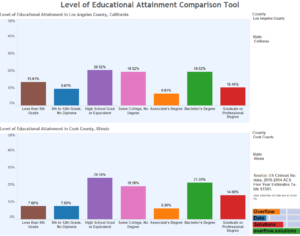