Last week the US Census Bureau released its most recent population estimates. I used this data to calculate the population growth between July 1st, 2014 and July 1st, 2015. You can use the visualization below to see how the population totals have changed in each state and county.

The data for this visualization comes from the United States Census Bureau. It is gathered during the Current Population Survey. After downloading the data, Microsoft Excel and Tableau were used to create this visualization. If you have any questions go ahead and leave me a comment.

What Ancestries Do Americans Report Having? 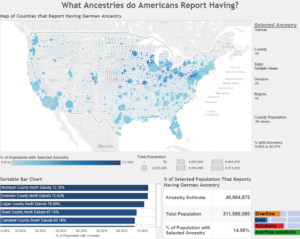