Trending
You are at:Home»Demographic Data»Is How Americans Get To Work Changing?

Over the last decade, the American people have been encouraged by fluctuating gas prices and concerns about climate change to change how they commute to work. To see if there has been any change, we decided to look at a decade’s worth of information from the U.S. Census Bureau, on the method of transportation people use to get to work. We were expecting to see some changes in the data over the last 10 years due to these issues. What we found is that there has been little to no change in how people get to work over the last decade.

Commuting to work in a motor vehicle, alone, has been and continues to be the most popular method of transportation in the United States, by far. In 2014, 76.46% of commuters, chose this as there primary commuting method.Over the last 10 years, the percentage of people that chose this method of transportation has only decreased about half a percent. You have to drop all the way to 9.24% to come to the 2nd most popular method of commuting, carpooling which is still motor vehicle based.

Public Transit has seen a slight uptick, but it definitely isn’t a huge amount, gaining only half a percent over the last 10 years. Working from home has seen similar gains. Both of these gains seem to be offset by a decline in carpooling. We believe this data shows that the American commuter continues to be price inelastic when it comes to the cost of gas and doesn’t see the need to switch commuting method for climate change concerns. 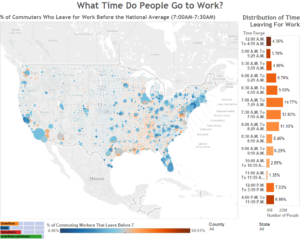